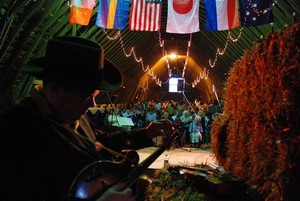 Well, Arnold is back from his trip to the planet of Butch Robins. And what a trip it was! Everything went very well and Robins has pointed out that he wants him back for every tour he’s going to organise for the World International Blue Grass Band. The point he wanted to make with this group was showing that bluegrass music is as international as most any other form of American music, like blues, jazz, rock ‘n’ roll and also rap, hiphop and r&b. Well, he succeeded in his mission and everyone was very enthousiastic about the band and the whole idea behind it. If you want to read more about his view on this, you can read all about his motivations on www.worldinternationalbluegrassband.com.

The Boogiemen have been going strong, also with Arnold gone, thanks to Joost van Es and Jan Michielsen of Four Wheel Drive and Izak Boom, who helped us out. Thanks a lot guys! Your cheques are in the mail! 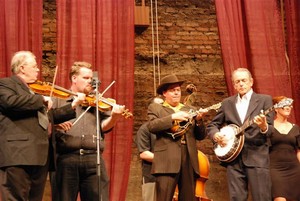 The World International Blue Grass Band. Click on the pic to read more and to see photos!

Meanwhile we’re still busy with the Hank Williams CD. Yes, it takes a while, but then again, we’re nearing the end of one of the busiest years we ever had in our 17 year span. 2008 looks promising as well so we hope to meet a lot of you folks down the line.

Thanks also to everyone who voted for us and made us win the Gram Parsons Award (for best acoustic/traditional country band) for the 8th time!

The Boogiemen are also featured in the new book on 50 years of popmusic in Utrecht, The Netherlands. It’s a very enjoyable book which comes with two CD’s and yes, the Boogiemen are on there as well.

Finally, the music of the Boogiemen will be featured in a Swiss movie called ‘Der Freund‘ by Micha Lewinsky and Langfilm AG which will be played in Swiss cinemas before too long. So we suggest to all our friends in Switzerland to go see that movie!

That’s it for now. Hope to see you soon and keep those message coming in our guestbook. We love to hear from you! Oh, and if you prefer to leave a message with a picture, a videoclip or whatever you can also visit one of our Myspace-sites. See Ya!