The year 2006 was a really good one for us, as it was a year in which we performed at, apart from the many trips abroad (Ireland, Denmark, Norway, Germany, France, Ireland, Belgium and Switzerland), a lot of great shows in our native Holland.

The highpoint without any doubt being one of Holland’s biggest festivals ‘Lowlands‘, where we played alongside acts such as Iggy Pop and the Original Stooges, Muse, Massive Attack, Fun Loving Criminals. ‘Blue Grass Boogiemen verpletteren Lima-tent’ is what VPRO’s 3voor12 wrote, which means as much as ‘Blue Grass Boogiemen shatter Lima-tent’, which was no exaggeration we can state in all modesty. Many people who saw us (including the soundguy of the festival) told us afterwards, or wrote in our guestbook (thanks!) that they had never experienced such an overwhelming reception by an audience in their lives.

To us also it was quite a surprise. We finally put bluegrass music on the map there and proved that this type of music also can work very well on big pop/rockfestivals, as long as it’s being played with the right energy and enthousiasm it deserves. Just like our friends of the Hackensaw Boys, who proved that their brand of acoustic music also is very suitable for such a festival.
As opposed to anyone who thinks bluegrass isn’t suitable for mega-festivals and big stages (as if anyone would be able to decide where bluegrass does or doesn’t belong), we want to reach as many people as possible. We’re actually quite happy to play those big stages and festivals, because there we also reach a lot of folks who have never heard of this music. Judging from all the messages we got after Lowlands, it seems we won quite a few souls there for this music. And at ‘Noorderslag‘ (another quite important festival in Holland) we got the same reception. Thanks to everybody who was there and cheered and shouted for more! We’ll never forget this.

In 2007 there’s also a few things to look forward to (sorry to our friends in the States, no trips across the deep blue planned this year). In March the recording of our addition to Starsounds series ‘Hits of…’ will be recorded. Starsound asked us to do a Hank Williams CD. Apart from some of his best known songs there’ll also be some lesser known material selected for this CD. We sure hope you’ll like the result.

In April a reprint of the book ‘Elvis in Nederland’ by the well known Dutch writer Rob van Scheers will come out, and a CD comes with it on which many famous Dutch artists (ánd the Blue Grass Boogiemen) perform an Elvis-song. Of course we recorded Kentucky’s official State Song ‘Blue Moon of Kentucky’; one of ‘The Father’ Bill Monroe’s best known (if not thé best known) songs which Elvis covered for his first Sun-single. We hope you’ll like the result. 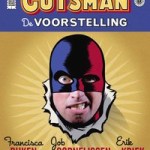 Also,’Gutsman de Voorstelling’ will be playing all over Holland throughout 2007. This is the theatre-danceshow which we made the soundtrack for. We recently saw the show and were really impressed. Already we had some folks inquiring after the soundtrack, but right now it’s not available on CD. We’re still negociating and hopefully it’ll be available in one form or another before too long.

We’re also working on a programme about Bluegrass music for schools. We recently did such a show when we were invited by the Insula College in Dordrecht. It was quite an experience, but we managed to keep the attention of the 15-year olds and judging to the messages we got afterwards we also won a few souls for the music. Hopefully we can get more schools interested and start that Monroe-doctrine in schools all over the country. Next thing you know, there’ll be Bluegrass in the Top 40!

All the best for 2007 everyone and hopefully we’ll see you somewhere down the road!