Bluegrass from the Netherlands?

Bluegrass. 1751. Being any of several American grasses of the Poa genus and having a bluish cast, earlier called Dutch grass (1671). (Source: ‘I hear America talking; an illustrated history of American words and phrases’ by Stuart Berg Flexner) 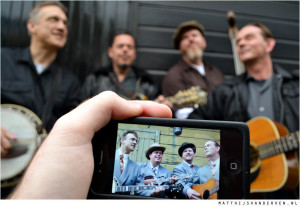 Hi folks! We are the Blue Grass Boogiemen and we’ve been playing traditional bluegrass professionally since 1990. Our show has proved to be very successful here in Europe. In Ireland we won the ‘Waterford Crystal Bowl’ for ‘most popular band’ at the Guinness International Bluegrass Festival, in Holland we won the ‘Silver Fiddle Award’ and the ‘Gram Parsons Award'(eight times) both for best acoustic band, and beat Alison Krauss to the number one spot in the ‘Strictly Country’ charts. Also in America, where we’ve been touring several times, people are very enthusiastic about our music.

World Famous fiddler Byron Berline wrote: ‘Your band was singled out as one of our ‘don’t miss’, ‘please have them back’ and ‘we love them’ groups…‘ after we appeared at his international bluegrass festival in Guthrie, OK, for the first time. Since then we’ve played his festival many times. The Washington Post wrote: ‘…the Boogiemen mimicked American music icons with absolute accuracy and joy…’ and ‘Mandolinist Arnold Lasseur did Bill Monroe proud…‘ after we played in Arlington, VA.

About our recorded work the Bluegrass Now magazine wrote: ‘…they have the tightest harmony of any band I’ve heard‘. Bluegrass Unlimited magazine wrote: ‘This is a highly entertaining band that comfortably handles a range of music with flair, taste and energy. Readers would be well advised to catch this band when they come through town. It should be a great show‘ and also ‘Gosh, this is what the music world’s been missing, isn’t it?…When I first played this album, which is an immensely entertaining collection, I thought I was listening to some unusually talented country-bluegrass band from Ohio or Michigan or some such place.’

But no, we’re from Holland alright. Holland, Europe that is! However we’re willing to travel to where ever you’d want us to play. So make your event truly international, contact us and book ‘…one of the most hard-hitting, versatile and entertaining bands on any continent…‘ as Bluegrass Europe magazine put it.